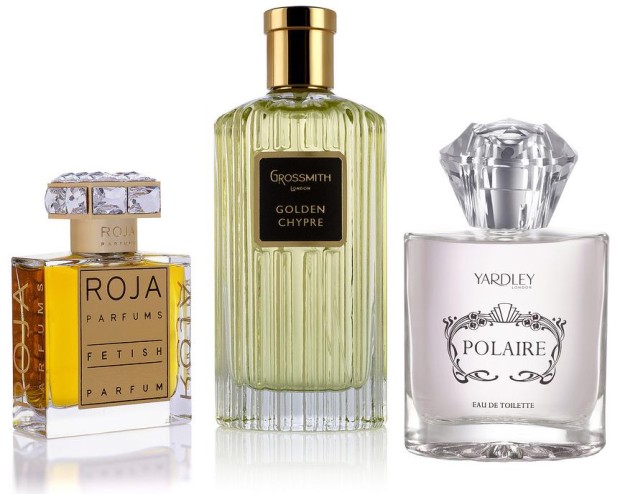 Life’s suddenly got a little bit beyond busy, so I’m really sorry for the lack of regular
posts…normal service will be resumed very soon! In the meantime, I thought I’d share
with you my latest feature for Khaleejesque.com, featuring some of my favourite perfumes!
You can read the original feature here.
In fragrance as in fashion, trends come and go. Just as hemlines and heel heights change with the seasons (and the economic climate), so too it seems does the latest scent. Top notes and base notes are either ‘in’ or ‘out’, one year fresh and floral is ‘the’ thing to wear, another year, we’re all hankering after heady, musky scents.
This year is set to be the year of the chypre, but make no mistake, the chypre family of perfumes is no fly by night. Chypres first came onto the market in 1917 representing elegance, sophistication and seduction, and became instantly synonymous with the Roaring Twenties and all the excesses that went with it. Prosperity, fun and freedom, a more liberal attitude to life, and the birth of Art Deco were just some of the the changes that marked the decade. And with the remake of The Great Gatsby about to hit our screens, what better time that to rediscover a classic fragrance?
Polaire is the newest fragrance from the house of Yardley, a classic British brand that has drawn on both its own heritage and on the allure of the magical decade of the Twenties. Named after an actress of the time, every element of Yardley’s latest creation oozes the charm and sophistication of the era. From the square set bottle with it’s heavy metal lid fashioned in an imposing bauble reminiscent of the jewellery worn by women of the time, to the girlie femininity of the fragrance that is never sickly sweet.
Shooting straight into the 21st century and seemingly across the gender track is a modern chypre from perfumier extraordinaire, Roja Dove. Strong, leathery, woody and musky, one whiff of Fetish, Roja’s latest creation under his own name, and you are instantly transported to wood-paneled whisky rooms, studded leather chairs, the promise of a cigar or two and a malt worth its weight in gold. While this may seem like a strictly gentlemen-only scenario, do not be fooled. The perfume is instantly wearable for the fairer sex, the Swarovski-encrusted bottle stopper only confirming what the wearer already knows; this is a fragrance for a woman who knows her mind, is not afraid to show it and loves to add a bit of show-off and drama into the mix. Wear this and everyone will ask you what you’re wearing. Whether you tell them or not is up to you.
Straddling somewhere in between is the very glorious Golden Chypre by Grossmith. Born of a resurrected established family-owned British perfume house, Golden Chypre is a scent that is not as strong as Fetish, yet not overly floral like Polaire. Grossmith’s rich fragrances were the height of luxury in the 1900s, with the first Baccarat crystal flacons commissioned in 1919 and international royal warrants awarded to the company between 1901 and 1925. The cut-glass bottle is a work of art in itself, while the Golden Chypre fragrance settles beautifully into the skin and lasts for almost the whole day; an alluring, more-ish fragrance that will become an instant favourite.
If you’re looking something new and a little different, why not try a chypre for your summer fragrance this year?
This article originally appeared on www.Khaleejesque.com