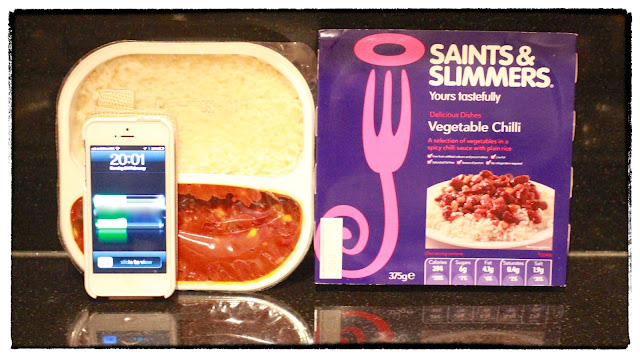 So I’m now half way through the two week trial of Saints & Slimmers, the diet delivery programme that I wrote about HERE, so I thought it was about time I posted a little update on how it’s going so far.

I’ll admit, although I know full well that to lose weight, I needed to keep to around 1000 calories a day, I was a little apprehensive about how I’d actually survive on this. I mean, it’s one thing to know the theory, quite another to live by it. Especially as I was hoping to throw in a little exercise into the mix (oh, hello gym kit, haven’t seen you in a while!)

So how has it gone so far? Am I still standing? Have I been cheating? Haha!

First off, let me say how impressed I am with the taste and flavours. I like my food with a full-bodied flavour in any case, but given that this was “diet” food, I was really not expecting anything at all. You know that feeling? You know you’ll eat it because it’ll help you lose weight, but not because it tastes good. Well, how wrong I was! Of course I found myself adding chilli (Indian tastebuds, what can I say?!), but I wasn’t adding salt (shock horror!) and I was really enjoying the meals. Chicken Satay, Chicken Tikka Masala, Chicken Sweet & Sour, Vegetable Chilli, Spaghetti Bolognese and Chilli con Carne, each of which was more than enough to fill me up in the evening. In the photo above, I’ve put the meal next to my iPhone so you can see it to scale and just how much food you get. In fact, this is the first time in ages I’ve eaten carbs in the evening, and I didn’t feel guilty for a second!

Breakfasts were mostly the ready-mixed milkshakes and again, I was pleasantly surprised. I was expecting a thin, watery version of a milkshake with not much flavour but the shakes were quite thick, filling and full of flavour – I had to keep my eye on them otherwise little hands would have swiped them away for themselves! I loved that they were so portable – so that I could find no excuse to miss breakfast. If I ran out of time before leaving the house, I could just take it with me and drink it en route. I had the Chocolate (my favourite), Vanilla and Strawberry flavours.

Lunch was either a meal replacement bar or a meal replacement shake. If I was at my desk, I opted for the shake, mixing the powder with water, but if I was out and about, then I took a bar with me, so that I didn’t miss my meal time, or eat whatever else came to hand (recognise that feeling?). The flexibility of this suited my busy lifestyle to a T and the portion control made me realise how much I overeat during the day.

I was also sent some snacks, each 100 calories, including snack bars, raisins and pretzels. I have to say, I’ve not really felt the need to eat them, (although, of course, I have, in the interests of research!) as I’m quite satisfied with the meals (along with the fruit and veg that I’ve added in to the value of around 200 calories each day). Both the snack bars and the meal replacement bars have added L-Carnatine and green tea extract, supplements that aid and support weight loss – clever, eh?

I’ve managed to exercise most days and not felt lethargic or wilted away by the end of the day so I’m pleased with that too. The only thing I’ve not managed to do religiously is drink the recommended 2 litres of water a day – on those days that I have, I can feel the difference, so next week, I’ll make sure I do.

I’ll update again at the end of the second week, but for now; so far, so good! If you’ve got any questions, please do ask away in the comments below. But for now, please excuse me as I don my gym kit!