Tell me I can’t eat something and you can bet your last Easter egg I’ll be eating it in copious amounts. Call me contrary, call it human nature, but there it is.


So you can imagine the mortal struggle I have on a daily basis as I’m not supposed to eat wheat, diary or yeast, especially as one of my all time faves is a really thick slice of bread, toasted to perfection, oozing with lashings of butter and smothered in Marmite (which is basically just yeast extract) generously spread over the top.


Imagine my utter delight, then, at being sent not one, not two, but THREE varieties of Organic Rye Bread by the very lovely people at The Village Bakery.  Not only are they all wheat-free, the only yeasts within are those naturally occurring in the rye grain.  Result! 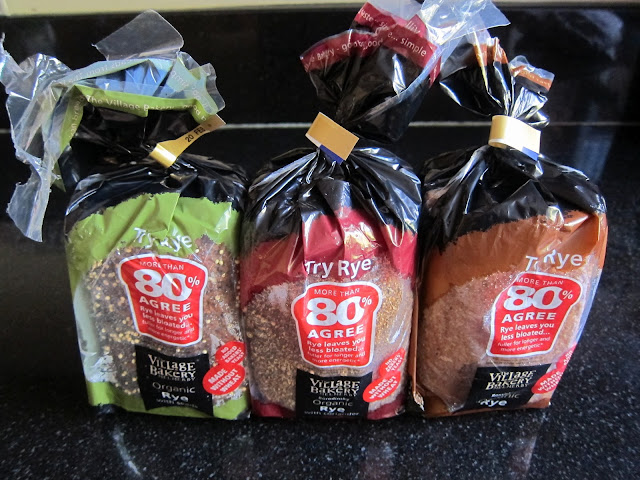 Now, in the interest of my FitBod campaign, anything that promises to reduce bloating, possibly lose a few inches without having to crash diet or ban certain food groups from my diet ( I think we all know which ones!) and keep my energy levels high has got to be tried out.


So for two weeks, instead of my usual slice of toast with my egg for breakfast, I’ve been having a slice (or two – what? they are quite small!) of the different Rye Breads.  And when the mid afternoon munchies have struck, I’ve been known to have a couple of slices with peanut butter or hummous.  Yumm!

In days gone by, I would have been paranoid that the carbs would make me lose weight, but as part of my 3-month Maxitone challenge, I’d promised the nutritionist that I’d eat carbs regularly.  This bread completely fits the bill, as it contains 4 times the amount of fibre – bye-bye bloating! – and actually, 20% less calories than regular white sliced bread (although I never eat WHITE bread anyway).


Anyway, enough of the what.  Here’s the why:


I’ve had other rye bread in the past, and all I can say about that is YUCK!  It bore no relation to bread, was almost black in colour, as heavy as a brick in texture and density, and the utter lack of taste (think eating cardboard) was the ultimate insult over injury.  I tried it once, and let me tell you, once was enough!


This, however, was a dream in comparison.  I loved it neat, cut straight off the loaf, but it really came into its own when it was toasted. The crunchy texture, the full-bodied nutty taste and the amazing aroma was enough to get the rest of the family interested and I literally had to HIDE it away from everyone to make sure there was enough for me!

Of the three varieties, the Coriander flavoured one was probably the “acquired taste” option, but I have to say, I loved them all.  With no wheat, no additives, no added baker’s yeast and no preservatives, I could even eat this if I was on a detox.

Since the three loaves sent to me have finished, I’ve purchased it at my local Waitrose at least three times, and now, it’s the only bread in my household.  Mr H, who tends to stay away from bread in general, loves it, and asks for it all the time.


Best of all, it really has reduced the bloating.


Only problem with that is, I can no longer blame the wheat intolerance for the big tummy… It’s now plainly and painfully apparent it’s all down to the excess fat (ssshhh!).


Hey ho. You win some, you lose some.  At least I now know exactly what I’m dealing with!